Wall-E or Ex Machina? Cute or creepy? Useful or gimmicky? With a world robot population of 414,000, we’re at a turning point in history where robotics are now entering our lives, but are they welcome in our homes?

Whether it’s Will Smith’s I-Robot, Steven Spielberg’s A.I. Artificial Intelligence or even The Terminator; sci-fi flicks have done a great job of terrifying us at the future prospect of robotics.

Yet, while we tend to believe robots are a thing of the future, the reality is robotics already stormed our kitchens years ago with the introduction of Amazon Alexa. We opened the dialogue between man and machine, with the ability to change songs, order food and ask for a funny joke hands-free. After this invasion into our homes, smartphones have been vying for the same attention begging us to say ‘Hello Google’.

•   Australia was the first country in the world to automate its ports.

But do we really need robots in our homes?

We’ve seen so many gimmick robots come and go over the years; from the adorable fluffy Furby that laughed when you touched its tongue, the wannabe kung fu master RoboSapien which fell over a lot and creepy Tickle Me Elmo, all more useless and annoying than the last. So naturally, we’re sceptical when the ‘future is finally here’ turns into post-Christmas landfill. The best way to approach current home robots is to manage expectations. That humanoid robot from I-Robot which can do your laundry, return your taxes and hell, could probably do your job is a long way away.

Boiled down, current home robot assistants are roaming sensory Alexas with some nifty gadgets stapled on. But how you decide to use this robot is a more important question. Much like the arrival of personal computers, the potential of machines is what you make of it.

As much as you love your kids, no human being has the energy to keep them engaged all-the-time. A robot, on the other hand, isn’t a human and can endure a child’s thousands of nonsense questions. Usually, we would drop tablets into the hands of the little ones and generally keep them pacified for hours. But we all feel that slight guilt, knowing the bright pixels probably aren’t best for their eyes.

When the home automation robot ‘Sanbot’ was revealed to the Home Show audience last year, one thing we noticed, is just how captivated children were with the machines. They stand there, wide-eyed, their attention locked and listening to every word that comes out of its ‘mouth’.

Last year, an intriguing study at the University of Plymouth explained this phenomenon; Professor Belpaeme said: “What our results show is that adults do not conform to what the robots are saying. But when we did the experiment with children, they did. It shows children can perhaps have more of an affinity with robots than adults.”

With this captured attention, anything is possible: story-time, dancing, learning or movie time with the projector mounted at the back of its head. And the robot has cameras installed on the front, so just like a baby monitor, you can always keep tabs (and maybe even relax).

We mentioned guilt earlier. Another family member who needs our attention comes from the other end of the age spectrum. We should all be aware of the looming problem of an ever ageing population (which will be us one day). We built the granny-annex to accommodate for our elderly relatives, but that still doesn’t solve the sad reality of loneliness. 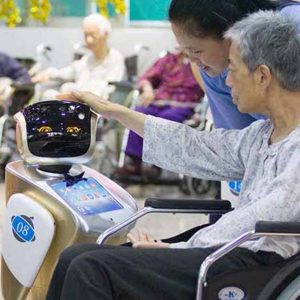 Robot companions have been proven to ease loneliness and stress when exposed to the elderly. It sounds ridiculous, but how much love did you feel for Wall-E? And that was just a hand-drawn robotic representation. These companions act as a presence in the home; that might just be enough to liven the deafening sound of silence.

Julie Carpenter, a researcher from Washington University, said: “Robots are not meant to replace people or interaction with people, but to assist people in therapeutic ways. There are no substitutes for other therapies or care by people, but something to be used as one means of therapy or amusement/comfort in conjunction with other things, like regular human interaction.”

Join the Festival family by becoming a Home Show Club member and you’ll be the very first to receive more stories like this, free tickets, special offers, inspiration and more!