Jesse & Mel – How to Get on The Block

Let’s rewind for a second and find out more about The Block’s ‘power couple’. Before the Block, Jesse Raeburn was a tradie tiler working on luxury apartments including Mirvac, Lendlease and Tom Dooley Developments. His background in million-dollar properties gives him a competitive edge on luxury finishes.

Now, Jesse works in real estate, selling the same luxury apartments he used to work on. In true estate agent style, he listed off his achievements including his first sale of $4.2 million. He even sold the winning penthouse on the Block 2015 for $2.45 million.

But through his success, Jesse stays humble to his craft, “I am fortunate enough to get into a lot of high-end properties and find a lot of similarities like chrome tapware. In five years’ time, I can guarantee chrome will still look beautiful. Every bathroom we build uses chrome.”

Mel (AKA ‘the bullet’) was the ‘secret weapon’ to getting on the Block. The pair actually attended the same school in the Gold Coast. Mel relocated to Queensland and connected again by a mutual friend when they settled in Melbourne. Mel refers to herself as the fiery but pragmatic one, balancing Jesse’s calm idealistic outlook.

How to get on The Block

Getting on The Block is difficult. Firstly, you are required to fill out a questionnaire which contains ‘a hundred’ personality questions that take ‘days to fill out’. This is to block applicants out of the process who aren’t serious contestants. Next, you will need to produce a short video with your partner to wow the producers.

Jesse shared their winning secrets, “The video we made was just Mel and I just talking for five minutes. There was no music over the top, there was no cut or paste. Because the producers would think that you can edit the video. But for us, we wanted to show we are authentic, that we’re genuine.”

Specifically, the producers are looking for a potent mix between confidence, chemistry and talk-the-talk. Lucky for Jesse, he was already briefly on the show to sell a winning house in the previous year, so he had a strong application. He revealed, “The first question the producer asked was, ‘what’s Mel like?'”

How to deal with curveballs

The term ‘curveball’ comes from the popular US sport, baseball, where a surprise ball is thrown at your face at 170kmh. On The Block, curveballs come in the form of starting again, mismatched estimates and stubborn body cooperates.

Jesse comes clean on the drama, “The most arguments we had were during the first three weeks on the Block because we were so overwhelmed. It’s a pressure cooker situation: camera in your face, twenty hours a day on mic, curveballs are thrown at you all the time.” 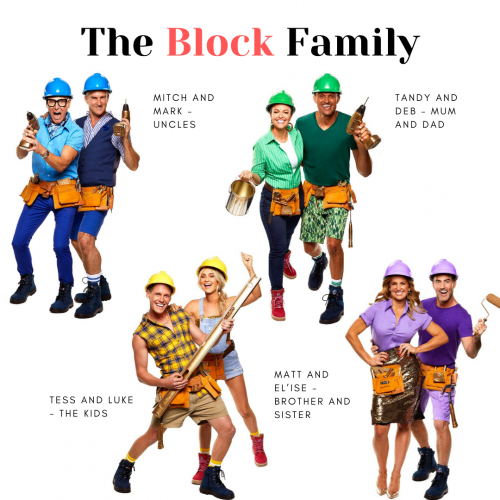 The headline-grabbing scuffles are often between the judges and Jesse. Never one to back down, he said, “I’ll often argue with Keith and Dan to prove a point, but I never argue with the tradies. Because I was a tradie once, I have so much respect for what they do and rely on their expertise.”

One curveball out of left-wing was their questionable living situation. Jesse recalled, “The Block was so mentally and physically hard. Probably not a smart idea for next year, but they put us in bunk beds together! So, you got really close to people really quickly.”

While thinking on your feet and picking your fights are vital skills in returning a curveball, Jesse said love has a lot to do with it, “I have faith in Mel’s abilities, and she has faith in mine.” 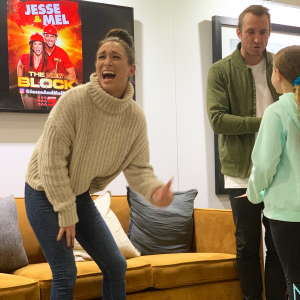 It was the kids who had their hands up first at the packed-out Home Show talk. Their adorable questions were too much for Jesse and Mel who admitted to saving their Block money for future twin babies.

Mel – “My favourite moment was on Sunday morning when you finish. When all the struggles of the week were worth it. When you drop everything, and you go, ‘we just did that, we just painted it, styled it, wow!'”

Jesse – “After the first 24 hours, you forget that the [camera] is there. Hence, you see such raw emotion, you can’t put on a fake persona for four weeks.”

“It’s interesting, the formal room we’re doing right now is my favourite room on The Block by far! We made a decision to put a hallway in because it’s very traditional of Georgian and Edwardian homes. They call it ‘the good room.’ You would likely not be allowed in there. It’s typically mum and dad’s room, and the kids are locked out. I’m still not allowed in the ‘good room’ at home!”

Blockheads should tune into the full live stream (below) for all the secrets, stories and tips from the show.